« In July of this year, Dow-Jones, goaded by the reaction to Snapchat having gone public with a class of shares without voting rights, announced that, after extensive consultation, it had decided to henceforth eliminate dual-class companies from its indices, in particular the S&P 500 Index.

Over the last ten years, putting money in passive index funds has become a popular form of investment. An index fund is a pool of money invested in a way that is proportional to the composition of an overall index, the S&P 500 being the most popular. Already in 2016, index funds managed some 506 billion $US in assets, accounting for 29% of all shares traded on American stock exchanges.

For a company to be excluded from the indices means that none of this large pool of money will be channeled into its shares, reducing demand and possibly depressing its share price. Of course, Dow-Jones quickly grand-fathered such notable large dual-class companies as Alphabet (Google), Facebook, Berkshire Hathaway (Warren Buffet’s company) and so on.

The Dow-Jones decision is actually meant to scare budding entrepreneurs when the time comes for them to “go public”. It is a well-known and important fact that entrepreneurs want to keep control of their business so that they can implement their strategic vision unhindered by short-term shareholders and their financial coterie.

As tapping into public markets to finance their growth usually meant listing their company on a stock exchange, entrepreneurs sought to keep control of their company by issuing two classes of shares, one with multiple votes, which they retained and through which they would control their company over time.

In 2015, according to Prosoaker Research (2016), 24% of all new share offerings (IPOs) in the U.S. were made with a dual class structure, a sharp increase from 15% in 2014 and 18% in 2013. So, young companies such as Alphabet (i.e. Google), Facebook, LinkedIn, TripAdvisor.  (and, in Canada, Cara, BRP, Shopify, Spin Master, Stingray) have issued two classes of shares to assure an unassailable control over their companies and relative imperviousness to the short-term gyrations of earnings and stock price.

The surging popularity of this type of capital structures has agitated institutional investors and other types of shareholders who pretend, with nary a legal support, to be the «owners» of the companies. Skirmishes about dual class of shares then turned into an all-out war led by index fund managers, some institutional investors, influential academics, the governance industry, investment bankers et alia. They allege that a dual class of shares results in a discounted value and a poor relative performance. They are prone to claim that the “one share-one vote” principle is the moral equivalent of the sacrosanct “one person-one vote” of electoral democracy.

Of course that equivalence between electoral democracy and shareholding is totally bogus. The real equivalence would call for “one shareholder-one vote”. In a democracy, the fact that one pays a million dollars in taxes does not translate in a thousand votes as compared to one who pays one thousand dollars in taxes!

Furthermore, in an electoral democracy, new comers have to wait for a considerable period of time before being granted citizenship and thus the right to vote; and certainly visitors and tourists who happen to be in a foreign country on its election day do not get to vote. That’s how democracies work; but “corporate democracy” gives the right to vote immediately upon purchase and share-swappers, tourists in effect, do get the right to vote if they happen to be around on record date.

What about the performance of companies with a dual class of shares? 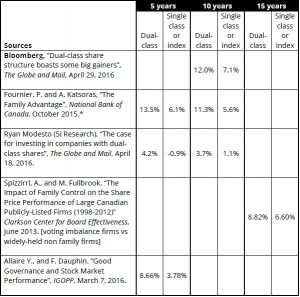 As for the U.S. case, it is ironic that at virtually the same time Dow-Jones was issuing its edict, a team of respected authorities on family firms and dual class of shares made public the results of a vast study based on 2,379 industrial firms (non-financial and non-utility) over the years 2001 to 2015.

What do they conclude?

“Striking, we find a very strong association between founding family ownership and dual class firms. Founders or their descendants control nearly 89% of dual class firms but only about 28% of single class firms.”….“[W]e find that a buy-and-hold strategy of dual class family firms earns excess returns of about 350 basis points [3.5%] more per year relative to our benchmark (single class nonfamily firms). Results from the matched sample suggest an even greater excess return – about 430 basis points more per year versus the reference firms. After controlling for time, industry, and a wide variety of firm-specific factors, our analysis does not lend support to the notion that dual class structures harm outside investors.”

Who really gains from the Dow-Jones decision?

Clearly, short-term investors and activist hedge funds stand to gain from the Dow-Jones license to push and shove emerging family companies to undertake financial engineering manoeuvers, or sell their company in order to produce quick gains in share price. Thus, an additional group of companies usually out of their reach will now become potential targets.

How will entrepreneurs of the future react to this threat?

They may shun public funding and stock market listing, curtailing their growth or finding alternative modes of financing. They may resist trading their control for “inclusion” in an index.

They may correctly surmise that “passive” investors in index funds will complain bitterly to sellers of these funds about the exclusion of new, high-tech, high-performance companies from their index.

Unfortunately, some, too many, entrepreneurs may give up their control under threat of exclusion from indices. Dow-Jones’ short-sighted, poorly grounded decision will be responsible for this outcome.

It would have been far wiser for Dow-Jones to use its leverage to get dual class companies to abide by some simple rules in order to be included in their indices, such as was proposed by the Canadian Coalition for Good Governance and IGOPP:

The author is solely responsible for the opinions expressed herein. »